Soult was a son of a notary. Had a good education that ensured him the rank of sergeant in the army of the revolution. In 1799 was a General and in 1804 Marshal of the Empire.
In 1808, he was appointed commander of the II Corps and entered Spain. He won the battle of Gamonal (or Burgos) and was detailed by the Emperor to pursue the army of Sir John Moore. In 1809 fought at La Coruña (or Elviña).
He remained in Spain for the following 4 years invading Portugal in 1809 and retiring form it after the battle of Oporto, fighting at Talavera (1809) and achieving the great victory of Ocaña (1809).
In 1810, he invaded Andalusia, taking Sevilla but failing to conquer Cadiz. In Andalusia he tough 1,5 milions of francs worth of art including paintings of Murillo and Zurbarán.
In 1811 marched to Extremadura taking Badajoz but losing the bloody battle of Albuera.
In 1812, with Wellington’s victory at Salamanca, evacuated Andalusia and in the Burgos campaign sent Wellington back to Salamanca.
In 1813 was sent to Germany fighting at Lutzen and Bautzen but returning to Spain in the last offensive across the Pyrenees in the battles of Sorauren, San Marcial, Nivelle, Nive and Orthez. He was finally technically defeated at Tolouse.
With Napoleon at Elba he declared himself a Royalist but on the Emperor’s return he joined him fighting at Waterloo but with not the same commitment shown in previous campaigns.

Soult accompanied by Louis Bertrand Pierre Brun de Villeret (1773 – 1845), his ADC from 1805 to 1814 shared the campaigns of Soult and also had his own affairs. In 1812, he and 60 Baden soldiers fought 400 guerrillas in San Ildefonso, fighting during 3 hours losing 20 men and all the horses but conserving his dispatches.

Soult is from Front Rank, the ADC on foot and Brun de Villeret are from Brigade Games not labelled as ADCs to Soult but the Uniform of Brun de Villeret is very obvious. All of them are really good miniatures that can be combined really well. 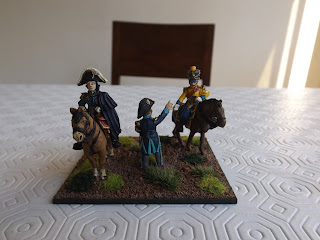 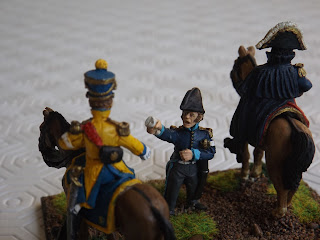 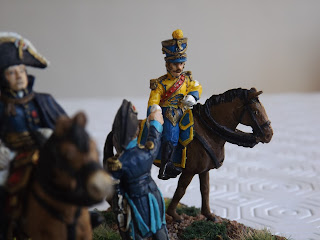