A "must have" unit for any peninsular wargamer should be the french gendarmes. Giving the huge amount of guerrilla actions that took part in that period, it's almost sure that those chaps would see a lot of action.
Scorting comboys, guarding prisoners, or defending outpost and communication lines are examples of scenarios where can be involved.

In Catalonia, there was de 6eme Légion de la Gendarmerie with several foot companies an squadrons.

When I saw the gendarmes designed by Paul Hicks and sold by Brigade Games I decided I needed them. The six figures (now 10 as they also sell command) are full of action and are a nice addition to my miniature collection. A unit of 6 is a decent number for a Sharp Practice unit and in addition can act as a tiny unit or a skirmish unit for blackpowder or general de brigade. The pictures don't really make them justice but are great miniatures. 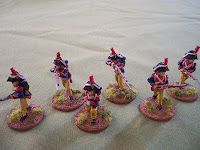 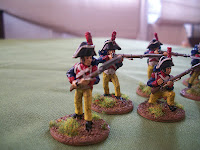 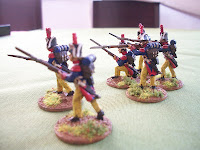 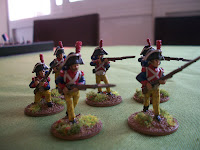 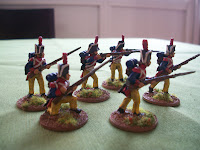